A game in which you bet on whether the Player or the Banker wins.
If you think it will be a draw, you can also bet on a “tie.”
Many people think that “Player” means the customer side, and “Banker” means the dealer side, but no such rule exists. Participants can bet on either side. 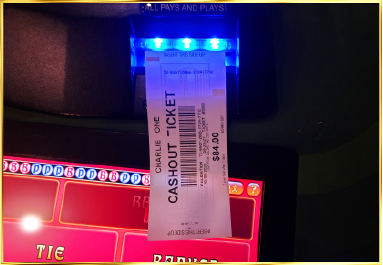 Insert dollar bills or tickets into the machine. 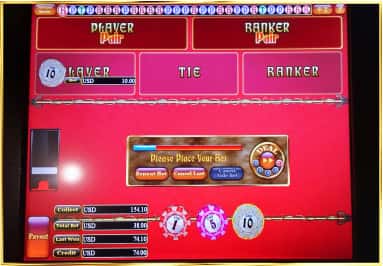 Enter the bet of your choice.

* Bet is defined as setting the amount of a stake.
* The maximum amount of the bet is determined by the limit.
* “Limit” refers to the minimum and maximum bet amount set for each machine.
* You can also bet on a “tie” or “pair bet.” 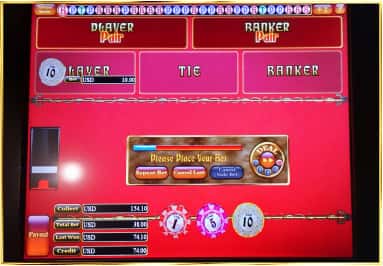 Once “No More Bets” is called, no further bets will be allowed. 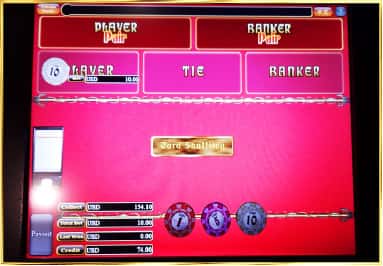 Whether you win or lose is determined by the sum on the cards dealt. Your chance of winning increases if the sum of the numbers is close to “9”. 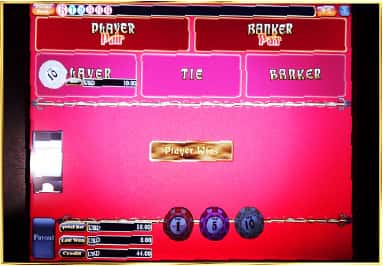 Basically, you will get twice the bet amount as a payout if win. The house will take the bet if lose.

Tie bet: A type of bet in which you bet on a tie.

Pair bet: A type of bet in which you bet that the first two cards dealt will be the same number (a pair).

Order of the hands

The highest hand is called a “Natural.” The game ends when the sum of either the Player or the Banker’s cards is 8 or 9. (The game ends with 4 cards.)

If the Banker wins, a commission of 5% of the bet will be deducted before payout.

People who place a Pair bet, i.e. assuming the first two cards dealt to either the Player or Banker are the same number (a pair) would receive 11 times payout.
The bet will not be collected by the house when the outcome is not a pair. A pair bet can be bet on by either the Player or the Banker.